Skip to content
Homepage / Headphone / WH-1000XM3, WISP or WF, Sony Decrypts The Names of Its Headphones And Earphones

WH-1000XM3, WF-1000XM3 or MDR. Every technophile who touches a little bit on audio knows these references of Sony headphones and earphones that have become references on the market.

But few of them know the meaning of all these frankly cryptic acronyms. Sony doesn’t really communicate on this point and the rare information I was able to find on the web was at best incomplete or even erroneous.

If we tested one of these products, we can perhaps guess that the “W” in “WH” refers to “wireless” or wireless, to Bluetooth. But I dare you to define the name WISP510B without getting a brain cramp.

Sony is obviously not the only brand to use acronyms for its product names. But this nomenclature is intriguing, especially since you see Sony headphones and earphones everywhere, especially in tech comparisons.

So we contacted the company and were able to talk to Jean-Denis Favier, product manager at Sony France for the headphones part.

“I don’t have an explanation of the why of the how of this nomenclature,” begins by explaining the product manager, amused, who did his best to decipher these code names for us.

Because yes, there is a logic behind all this and our lexicon should allow us to better identify Sony’s audio product ranges and families.

A System That Is Not Based on Price Ranges

“Each appellation refers first of all to a form factor, it doesn’t work by price range,” says Jean-Denis Favier. “Acronyms are more about whether you’re dealing with a C-arm, a headset, or I.T., wired or Bluetooth.”

On the wired side, we have the C-arms whose names start with MDR Micro Dynamic Receiver. This acronym refers here to the dynamic range,

which is the ratio between the lowest and highest levels of a sound. Still on the wire, the in-ears have a name that begins with IER, for “In-ear”.

Let’s get to the heart of the matter, wireless headsets and earphones. On the Bluetooth part, the C-arms are grouped under the acronym WH.

“WH” for “Wireless- no, not Headphones, lost but Headband” or wireless headband. The Bluetooth in-ear is the acronym WI for “Wireless In-Ear.”

Fully wireless headphones are called WF for… “True Wireless,” go figure. We have the “W” for wireless but we can’t really see what the “F” stands for and neither can Jean-Denis Favier.

We didn’t say it all makes sense. But an AndroidPit reader told me that the acronym could also mean Wire Free.

Sony Acronyms on Bluetooth
Definition for each product type

The Logic Behind This Lexicon: Some Concrete Examples

Well, you must have a headache with all that mental gymnastics and all the definitions you’ve just been bombarded with.

But in reality, there’s a real logic behind this seemingly confusing lexicon. Some letters and numbers are indicators of price range, embedded technologies or simply product colour.

Let’s start with Sony’s star product, the WH-1000XM3. Thanks to Jean-Denis Favier, we know that the WH refers to the family of products and that we are dealing with a Bluetooth headset. “The 1000X refers to the top of the product range at Sony,” says the Sony manager.

So we can see a little more clearly on this system. We could schematize it this way: 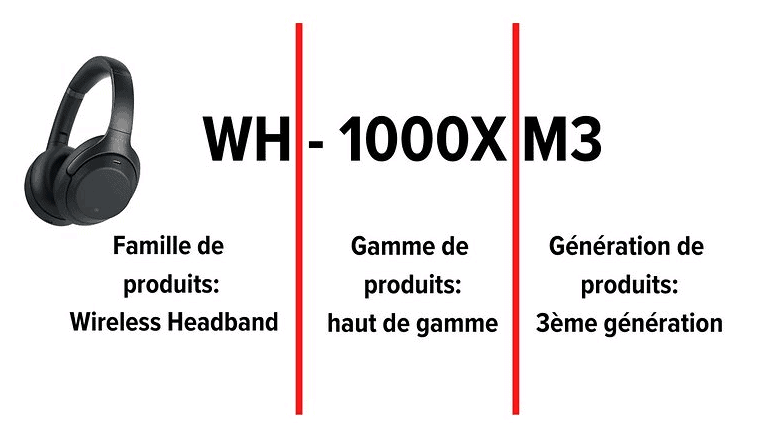 But it’s not a general rule. There are many other acronyms that refer to more than just the type of product. There are acronyms to designate a particular technology embedded in the product.

This is the case of WH-CH710N where the “N” refers to “Noise Canceling” which is the active noise reduction technology. For the “CH”, on the other hand, Jean-Denis Favier is a touch-key player.

These headphones announced at the beginning of April along with two new earphones replace the WH-CH510, cheaper and without active noise reduction.

We can see that the number also translates (not always) an upgrade, the 710 is more premium than the 510 so more expensive.

It should not be seen as a fixed price indication, but it is at least indicative of the technical ambitions of the product.

One of Sony’s other recently announced new products is the WI-SP510 wireless in-ear earphones, the “WI”, as we know, refers to the Bluetooth “(wireless in-ear)”. “But the SP here refers to ‘Sport’,” says Jean-Denis Favier.

As for the 510, we can guess that it’s the entry-level model, which is confirmed by its price of 80 euros.

The XB of the WF-XB700 is based on Sony’s Xtra Bass technology, a sound treatment that is applied to the bass for a deeper sound without eating the treble.

Finally, some letters can also simply represent the colour of a given product. For example, the “B” at the end of the name of the Sony WH-CH710NB headphones does not indicate any on-board technology or any indication of a range, but just the colour of the headphones: black or “black”.

Now you have valuable knowledge that 99% of the Sony community doesn’t know. I hope this article will help you to see a little more clearly in Sony’s excellent audio catalogue.

The lexicon is not exhaustive, it doesn’t evoke for example the nomenclature used on the “Signature” range of the Japanese giant, rather audiophile.

However, many acrnoymes are hidden in it, like the MDR-Z1R. “Z” for “Zignature”, maybe?