A recent leak was a reminder of the imminent commercialization of Surface Earbuds. The leak had not lied and it is today that Microsoft announced the arrival of its headphones on the French market.

In October 2019, Microsoft unveiled its Surface Earbuds, its first true wireless headphones. Since then, we had remained a little bit without news of the small accessories with such a particular look, until a leak announced in April this year their upcoming release.

And she had hit the nail on the head: Surface Earbuds sotn are now available for pre-order in the United States, and will soon be marketed in France.

Price, features, availability, here’s everything you need to know about the first truly wireless headphones from Microsoft.

With the Surface Earbuds, Microsoft Launches On The Market of True Wireless Headphones

The Surface Earbuds 2 are a very small earphone with a kind of big disc on its surface, and they are still making people talk, precisely because of their special design.

Why such a large surface? For two reasons: firstly because the earphones have tactile controls, and secondly because they completely cover the inside of the ear. 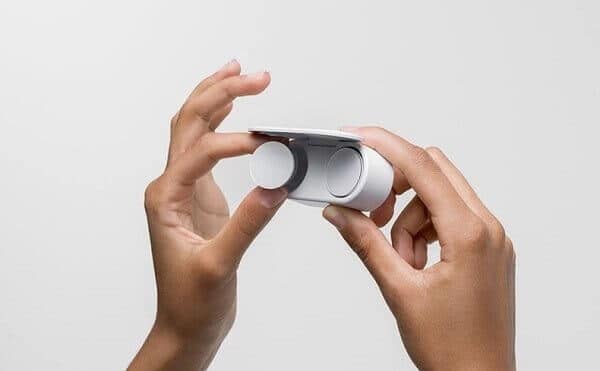 According to Microsoft, Surface Earbuds also have a 24 hours battery life and offer 1 hour of listening time for every 10 minutes of charging time, of course, they are delivered with a small case that allows them to be recharged.

On the purely audio side, they support SBC and aptX, while they benefit from the “Surface Omnisonic” sound. This one proposes to regulate with precision the listening, always according to Microsoft.

It goes without saying that we will have to test the headphones from top to bottom to evaluate their audio performance).

Finally, the two small accessories benefit from IPX4 resistance, which means that they are splash-proof, but not to a water jet and even less to immersion.

Microsoft Earbuds will be available for $199 in the United States as of May 12. In France, we will have to wait a little longer, since Microsoft announces an availability as of June 12, 2020. They will be priced at 219.99 euros.

It should also be noted that, in the wake of the Surface Earbuds announcements, the Redmond giant took the opportunity to lift the veil on its Surface Go 2 tablet, its Surface Book 3 transformable PC and its Surface Headphones 2.