Valve’s latest Steam gamer hardware survey is out. For the first time, the market share of AMD’s Ryzen processors is above 30%. Intel’s Core i is below 70%.

On the graphics card side, AMD is present in 16% of PCs, compared to 75% for Nvidia.

In recent years, we’ve seen a big push from AMD in the processor space. Ryzen processors are becoming more and more attractive to consumers.

First of all because their performance is not as bad as Intel’s Core i, and this even if Intel has recently announced new processors that are even more powerful.

Secondly, because AMD’s price is very attractive. So much so that Ryzen are praised for their excellent price-performance ratio.

And it works. The proof is the “hardware and software survey” published by the Steam game store owned by the developer Valve.This survey is monthly. And the latest figures are from May 2021.

So they are still fresh. And they hold a pleasant surprise for all AMD fans: the foundry runs more than 30% of Steam visitors, a fairly representative population of computer gamers.

“Big Blue” is falling back month after month by a few tenths of a percent. Over the long term, we see Intel’s dominance slowly eroding. 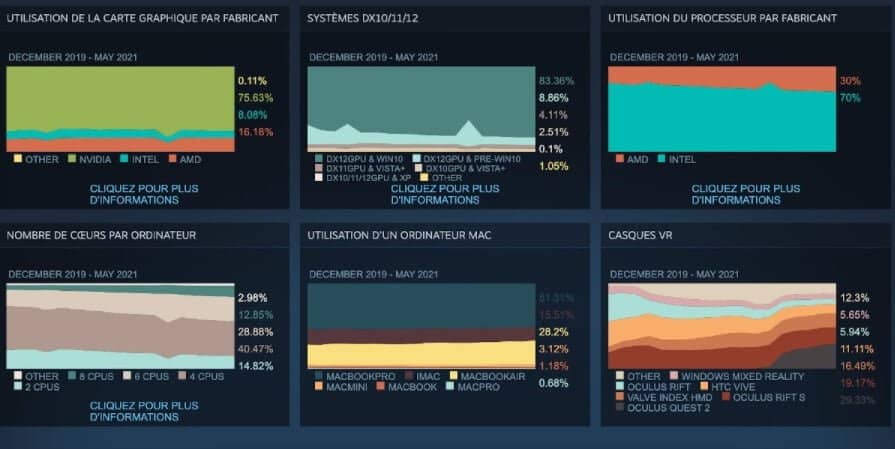 Macs are obviously present on Steam, although the game library is much lighter. Apple gamers still prefer to play on a MacBook Pro (51.31%), but the MacBook Air is becoming increasingly popular, topping 28%.

The iMac is third, with 15.5 percent. The Mac Mini, Macbook and Mac Pro are almost negligible.

Finally, the survey also takes a look at VR headsets. We see the extraordinary breakthrough of the Occulus Quest 2, announced in December 2020.

In just a few months, it has become the most popular VR headset on Steam, surpassing the Occulus Rift S, the Valve Index and the HTC Vive. It is used by almost three out of ten VR-equipped gamers.