Skip to content
Homepage / News / GTA 5 Free For Life On The Epic Games Store This Thursday, Here's How To Get It

A good way to build up a nice library of titles without paying anything. And this time, Epic Games is hitting hard since it’s GTA V that is offered.

GTA V Available For Free on The Epic Games Store

It was the GSR’s Twitter account that blabbed the whistle before its time. “Get GTA V free on PCs until May 21. You’ll keep it forever on the Epic Games Store,” it says.

A tweet that was mistakenly published too early and has since been deleted. But some users have had time to take a screenshot of the tweet.

On May 7, the publisher made the little game Death Coming available to us, and was to communicate on the title that would replace it on May 14.

Instead, Epic only announced a “mystery game”. There were two possibilities: either he didn’t know yet which title would be free, or it was a very big surprise to come. We now know that the second option was chosen.

To take advantage of it, all you have to do is log in to your Epic Games Store account (or create one if you have one) and access the store from the web or PC application.

The free game of the week is highlighted there, you just have to click on it, then on the Get button and finally Confirm Order.

GET IT GTA 5 For FREE

While GTA V was released in 2013, at the beginning of the current generation of consoles, the Rockstar Games title is timeless and continues to sell well.

It has sold more than 120 million copies, making it the third best-selling title of all time and the first for the 2010-2020 period.

More than just a solo adventure, GTA Online is a real cash machine for Rockstar. The multiplayer mode of GTA V remains constant in audience on Twitch despite the passing years.

Epic offers us a good way to wait for GTA VI, which is rumoured to be in development, but isn’t expected to arrive for a few more years, missing the launch of the PS5 and Xbox Series X.

Tweet ad is deleted, so here you go pic.twitter.com/3oja0C3418 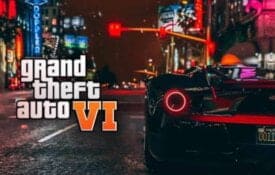