UPDATE: The system will be available on April 28th.

Bluetooth rather than geolocation. This is the compromise that “contact tracing”, the collaborative and non-geolocalised tracing technology for Covid-19 infectees that Apple and Google are working on and that could be used for the French government’s StopCovid application, would allow.

On Friday, April 10th, the two Californian giants announced they were working together on integrating an API (a programming interface) on iOS and Android to integrate contact tracing technology into our smartphones by May.

This is based on the exchange of information between smartphones via Bluetooth to identify and “track” people infected by Covid-19.

It is unclear whether the government’s StopCovid application, which is expected to be completed between May and June 2020, will be based on this particular API.

But in an article from the Android Authority on Tuesday 14 April, Google and Apple at least allowed us to learn a little more about how contact tracing works and its potential limits.

The news was announced on Twitter by the European Commissioner for the Internal Market, Thierry Breton. After a videoconference with Apple boss Tim Cook, the former president of the National Association for Research and Technology confirmed that developers will be able to use contact tracing technology to design their dedicated applications from 28 April.

I just had a good exchange with #Apple CEO @tim_cook on the need to ensure that contact tracing apps are fully:
✔️anonymised
✔️voluntary
✔️transparent
✔️temporary
✔️secured
and interoperable across operating systems and borders.#Deconfinement apps must respect our #privacy. pic.twitter.com/VrnUXOsrat

While debates and criticisms flourish around this technology considered too centralized and not anonymized enough by some experts, its launch will take place on the day of a non-binding vote in the National Assembly on this measure.

Contact Tracing According To Google and Apple, How Does It Work?

The classical scheme of operation of this technology as envisaged by Cuppertino and Mountain View is as follows:

Two people (Person A and Person B) talk to each other, face to face, for about ten minutes. During this time, the smartphones of each of the two people are in close proximity to each other and communicate through secure Bluetooth LE signals and create “beacons”. 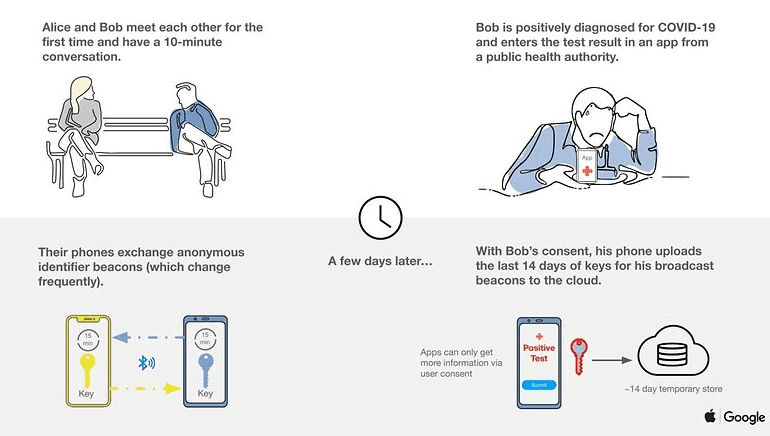 Mutual recording of certain anonymized and encrypted information occurs when smartphones detect each other via Bluetooth. Later, Person 1 learns that she has been diagnosed positive for Covid-19.

With his consent, his smartphone will share his information (the history of people he has met) for the last 14 days on one or more decentralized servers.

During this time, Person B’s smartphone will regularly check these servers to see if he or she has been in contact with anyone who has recently contracted the virus.

It then downloads all the positive diagnostic tags sent to the server and looks for a match with its user’s server. 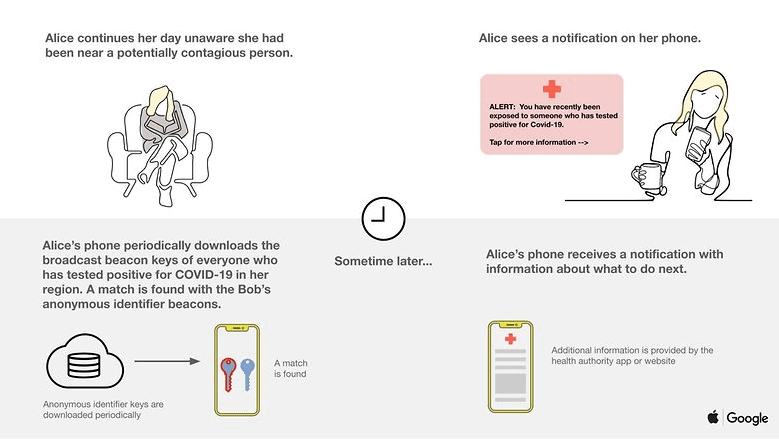 The smartphone of Person B finds the tag of Person A (infected) and sends a “Push” notification to its user that he/she has been in contact with a person who has tested positive for coronavirus.

The idea is therefore to identify the patient sources and therefore the chains of contamination and thus slow the spread of the epidemic especially when we enter the deconfinement phase (next May 11th a priori in France).

But the interest, which is also its main limitation, of contact tracing is that it does not rely on geolocation, GPS or cellular triangulation of your smartphone.

We also see that Apple and Google technology should take into account the duration of contact detected through Bluetooth, which should limit the number of false positives generated because of the inaccuracy of Bluetooth.

It remains to be seen whether the 10-minute threshold mentioned in the above infographics will be the one used to determine whether or not there was contact.

How And When Do Google and Apple Plan To Launch This System?

First of all, it must be understood that Google and Apple are not working on a common application. We are talking about an API or programming interface, which allows third-party developers to use certain features of an operating system.

Concretely, this API would simply make the development of applications based on contact tracing, such as StopCovid, easier on iOS and Android.

This API should be deployed in an update by next May and would be interoperable between the two operating systems.

But iOS and Android are two very different systems. For Google, deploying the update on every model of every manufacturer under Android would be a logistical nightmare, the fault of the fragmentation of Android. On iOS, the system is much easier for Apple.

That’s why Google should deploy this update will the Google Play Store while Apple should release a full iOS update by mid-May.

Contamination and thus slow the spread of the epidemic especially when we enter the deconfinement phase (next May 11th a priori in France).

Paranoid And Undisciplined, The Obvious Limits of Contact Tracing

That’s all well and good, but contact tracing is still a vast undertaking. Even if Google and Apple develop this API in time, there is no guarantee that health authorities and governments will use it.

The StopCovid application of the French government should come out between the end of May and June 2020 as Cédric O, Secretary of State for Digital Technology, explained. It is doubtful that development will wait for the deployment of this API in May.

But it is above all the reticence of privacy paranoia as well as the general lack of discipline of the French in the face of containment that will make this contact tracing technology difficult to implement.

Once the API has been deployed and the applications developed, users will need to install the apps and activate Bluetooth while on the move.

Given how difficult it is to follow the containment measures to the letter, it is hard to see everyone using StopCovid religiously, for example.

The rather high level of electronics in France is also an obstacle, not everyone will have the reflex to activate Bluetooth when leaving home, and a whole section of the population does not even own a smartphone.

The issue of personal data also remains a serious obstacle. Apple and Google are hammering it down, your data won’t be collected just anyhow, but the project has met with an outcry from privacy advocates in the United States.

However, no geolocation data will be used by this technology. All data shared via Bluetooth will be stored locally on your smartphone.

The data sent to the servers (the tags of the last 14 days of an infected person) will be decentralized, there will not be a single server that contains all this data.

Moreover, this anonymised and encrypted data will contain only the strict minimum of information (date of diagnosis, places visited, people met).

However, it is understandable that a large proportion of users will remain reluctant to trust Google, Apple or any other organisation with regard to the security of their personal data. These people will certainly not use the sharing function of applications like StopCovid.

On the other hand, “contact tracing” is only the tip of the iceberg. To really limit the spread of Covid-19, the data collected through the StopCovid application will have to be combined with a wide range of medical tests. A device that is not yet widespread enough in France.

What do you think of the contact tracing solution? Are you worried about the fact that Apple and Google are getting involved? Would you agree to use an application based on contact tracing, rather than one that uses your geolocation data?